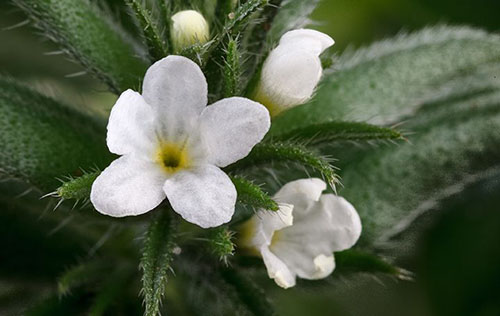 Alpha-Linolenic Acid (ALA) is the most common plant-derived omega-3, and the building block for other omega-3s in our body. Only about 3-6% of what we consume is converted to other important longer chain omega-3s like EPA and DHA which are important to health maintenance and disease prevention.

Amongst plant-based sources, Ahiflower is the richest source at 18-20%. All ALA humans consume is converted to SDA before being converted into other omega-3s, so our bodies are very familiar with it. Consuming SDA from plants is the most efficient way to boost your overall omega-3 and, unlike ALA, approximately 30-40% of SDA gets converted to other important longer chain omegas.

Our bodies can make all of these very long-chain omega-3s by ingesting SDA and to a lesser extent, ALA. Collectively they produce compounds to support a healthy inflammatory response and they are associated with improved cognition, joint, skin, immune health, and cardiovascular health.

Linoleic Acid (LA) is typically considered the less healthy fatty acid, which is unfortunate, as they are essential for health, however, there are ‘good’ and 'not-so-good' omega-6s.

The most common are plant-derived omega-6s and are the building blocks for other omega-6s in our body. Ideally, omega-6 should be present at similar or slightly higher levels than omega-3 in our diets (between 1:1 and 3:1). The abundance of LA in soy, corn oils, etc. has pushed this to approx. 25:1, with very negative consequences, including the production of AA (arachidonic acid), which is pro-inflammatory. Sources for LA include corn, hemp, and soy.

Like SDA, GLA is uncommon in commodity oils but found in some healthy oils such as evening primrose and borage. It’s a very good omega-6, and unlike LA, gets readily converted to omega-6s that have anti-inflammatory properties, and is further associated with good skin and hair condition, and with hormonal balance.

Typically considered a healthy fat, because it’s a monounsaturated fatty acid and most widely found in olive and avocado oil in the form of oleic acid. It’s primarily associated with reducing LDL cholesterol and increasing HDL cholesterol, as well as lowering blood pressure.

We can’t possibly summarize all of the research into how omegas function in our bodies, however, with over 30,000 published research papers, there is no real shortage of evidence that they are indeed essential for health. Further, as one of the largest and longest enduring categories of health supplements, it would appear as though millions of people are seeing a genuine benefit. In summary, there is overwhelming scientific and consumer evidence as to the health benefits of omegas.

What is less clear and certainly the basis of much controversy is whether or not taking high doses of specific fatty acids such as EPA or DHA is better than taking a complete and balanced omega supplement. Measuring and fixating upon raising EPA and DHA levels alone is not necessarily the solution and a simplistic way of looking at a holistic issue.

With the correct starting nutrition, humans have evolved to take a complete and balanced intake of omega 3,6 and 9 (as found in seeds, nuts, fruit, vegetables) and from these building blocks, adaptively convert and assemble the optimal reservoir of functionally-advanced omegas for all-around health and wellness.