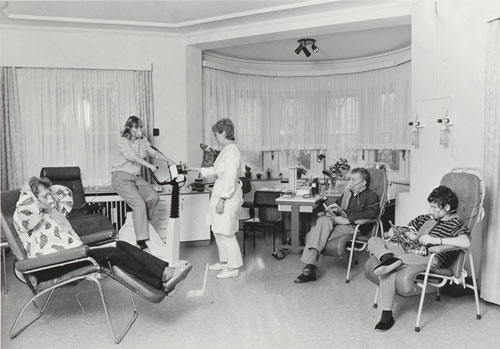 The original EWOT system was invented by Dr. Manfred Von Ardenne as Oxygen Multistep Therapy. Dr. Von Ardenne was an accomplished inventor and researcher. He had over 600 patents in radio, television, medical and nuclear technologies. He invented the first working scanning electron microscope in 1937. He applied his vast knowledge of physics to develop medical technologies after he completed his work on atomic weapons. Dr. Von Ardenne was looking for ways to support his patients cardiovascular and cardiopulmonary systems during experimental cancer treatments he was researching in the 1960s. He began using increased oxygen along with exercise to these patients to increase energy and optimize cellular metabolism. His work was successful and he was able to prove through research that patients benefited from this simple yet effective combination treatment.

A basic foundation of his work with EWOT was the fundamental truth that energy production (creating cellular ATP) is limited by the transport of oxygen to the tissues rather than nutrient supply or food intake. He understood the basic biological truth of oxygen as the giver of life, without it, all cells would die. He noticed that when the body was battling the effects of disease or old age, the cells of the body tended to be oxygen deficient and therefore energy deficient. Another observation he made was that health is associated with youth and a high level of energy, while disease and old age are associated with a lack of energy or what he termed energy deficiency. He developed protocols to increase oxygenation to patients using exercise along with concentrated oxygen and medications/vitamins to improve oxygen uptake in what he named Oxygen Multistep Therapy, which later developed into EWOT.

Dr. Von Ardenne discovered the benefit of EWOT was to the restoration of the diminished blood microcirculation of the endothelium and capillaries. EWOT improved oxygen delivery to the endothelial cells and to the rest of the body. He noticed the improvement in health it had on patients as they became more energetic and their cardiovascular systems improved quicker or more than they would have with exercise alone. In addition, patients with chronic diseases such as high blood pressure, coronary artery disease, cancers, age related illnesses, and diabetes benefited with EWOT treatment combined with standard medical treatment. He was able to document the lasting health benefits of EWOT by measuring the permanent increase in oxygen uptake of the tissues at rest and at work. (A lasting increase in the power reserves of the organism). He discovered the "switching mechanism" of the blood microcirculation. This effect occurs within the endothelial cells of the capillaries of the entire body. This regulating mechanism is controlled by the energetic status of the cells either hyperoxic (increased oxygen status) or hypoxic (decreased oxygen status). The effect is seen to be generally reversible and the blood microcirculation can either be strengthened by a positive effect (increasing oxygen status) or weakened by a negative effect (decreasing oxygen status). A capillary that has been narrowed by oxygen deficiency through disease (stress, pain, old age, sickness) can be re-enlarged by EWOT. This re-enlargement will appear after increased oxygen uptake in the blood and improved oxygen utilization of the tissues. Resolved inflammation within the tissue allows more oxygen into the cells, favoring aerobic metabolic pathways which multiplies cellular ATP (cellular energy). This increase in the body's energy status promotes a healthier state. 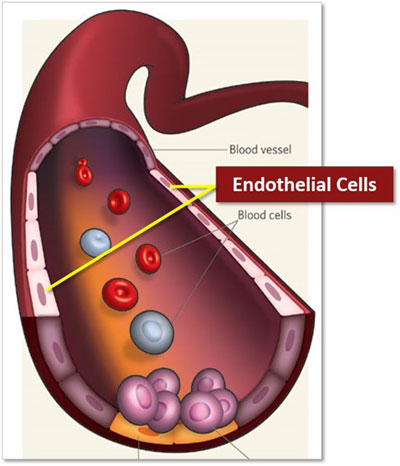 Dr. Manfred Von Ardenne's development of EWOT led to its use as both a medical and a health treatment in over 600 centers and on over 100,000 patients throughout Europe. It continues to be used today, improving the health of the public.  With EWOT, you get all the benefits of aerobic exercise along with the benefits of increased oxygenation (i.e. hyperbaric chamber, ozone) but there are many advantages to EWOT, as it is much simpler than hyperbaric and it takes less time.   Also it is not dangerous like ozone therapies and its much less expensive.  There are additional benefits of exercise with EWOT that you receive that you don't get with the other the treatments. (improved cardiovascular health, increased strength, stamina, endurance). Another benefit is that the increased oxygen that you receive in EWOT is made to produce work in the body as an active system, meaning the added oxygen will be going through your vessels, lungs, heart, brain, organs, into joints, muscles.  Studies show that the increased oxygen provided to you during a 15 min EWOT session will dramatically improve  microcirculation within the endothelium, decreasing dangerous inflammation which is present in almost all major chronic diseases.  The body will better be able to clear metabolic wastes (lactic acid) and alkalize tissues reducing acidity.  (a decrease in acid associated conditions, ulcer, inflammation).  Increased oxygenation will help to heal the damaged endothelial cells within the arteries and vessels.   Increasing oxygen to cells will increase the cellular ATP (cellular energy currency) production by promoting aerobic cellular metabolism. This will increase your body's overall energy levels favoring a state of health. The more ATP in your cells the more energy your cells will have to carry out all the reactions needed for good health. (optimum cellular functioning)

EWOT raises the resting arterial partial pressure of oxygen in the arteries of people performing the treatment. It also lowers their resting venous partial pressure of oxygen. What this equates to is a greater release of oxygen from the pressure difference between the arterial side of the capillary and the venous side. Oxygen gets to the various organs, tissues and cells of the body through a pressure gradient. The greater the pressure the better the delivery of the oxygen to the cells of the body and the better removal of waste from the cell (lactic acid removal).  In addition the immune system will be better able to get to problem areas in sick tissues. This is especially important for people who have chronic disease or who are aged. EWOT will help every condition of people who can perform the treatment by increasing cellular energy and helping the body to fight diseases. The secondary effect, besides increasing cellular energy, is to decrease inflammation in the body starting within the blood vessels of the endothelium which are responsible for vascular health. It has been shown to improve angina, reduce migraine headaches, reduce and normalize blood pressure and protect the heart from heart attack. The increased oxygen from EWOT will improve oxygen utilization within the cells of muscle tissue, and joints as well as organs such as the lungs, heart and brain, correcting any decreased cell functioning due to oxygen deficiency. Dr. Von Ardenne's studies also showed EWOT is effective as a protection against cancer because oxygen is an excellent boost to the immune system. His studies showed improved immune functioning after EWOT treatment. Another benefit of oxygenation with EWOT is that it can help you lose weight by increasing your energy level naturally without any nutrient input. More energy means less fatigue and will decrease "rebound eating" which is where people binge eat because they feel like they are going to crash. EWOT also helps the body to metabolize fat by increasing enzyme activity of the cell, making it easier to access and burn fat.

"A wide variety of illnesses including heart disease, cancer, circulatory disorders and mental illness are sometimes related to oxygen deficiencies. Although not a cure, oxidative therapies generate more oxygen in the body and can contribute to the recovery of disease, as well as, help to achieve optimum overall health and longevity."

Are there dangerous side effects or the possibility of oxygen toxicity using EWOT?

The most common side effect is some minor drying of the sinuses and throat from the oxygen air which can be remedied by drinking more water and staying well hydrated. The research by Dr. Von Ardenne has shown that with the amount of oxygen being received during the 15 min procedure, the partial pressure and the concentration of the oxygen are well within the safe limits to avoid any chance of oxygen toxicity in anyone using the EWOT correctly. There are no reports, over the past 30 years that any of Dr. Von Ardenne’s protocols have ever caused any sign of oxygen toxicity in any person. Oxygen toxicity only occurs with long exposures to elevated levels of oxygen (more than 4 hours) and or with very elevated oxygen partial pressures. The EWOT procedure is only 15 min and the most concentrated oxygen is at 85% partial pressure. This is within safe limits when used correctly. When performing this procedure at our center, a trained individual will be monitoring the patient checking for any unexpected side effects, checking oxygen saturation status, pulse and blood pressure before and after treatment. The patient will be working in a safe environment well within their aerobic training zone.